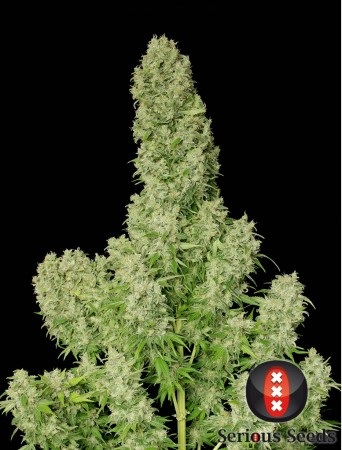 These seeds produce strong, healthy, fast growing plants that are fantastic in appearance and effect. Very popular also for outdoor growing in Spain, France, Italy and California. This variety is our most typically Indica strain. White Russian is a stable cross of our original AK-47 and the famous award-winning clone of White Widow from the 90s. She is of medium height, developes into consistent ‘not too leafy’ plants and produces dense, very resinous flower tops (crystals start to appear after about 5 weeks of flowering). The plants smell quite strong during the growth and flowering period. In an independent seed comparison in the UK in which over 150 different seed strains were grown, the White Russian came out as the strongest plant. Winner of the overall High Times Cannabis Cup in 1996 and of the Cup for Best Bio Grass in 1997. The plants yield very powerful buds, coated with an abundance of resin. The effect is a very strong, long lasting High, which is more cerebral (=head-high) than it is a knockout (=body-stoned). Excellent medicinal plant for pain-relief. Last awards won by White Russian: 1st prize Indoor, El Punto Cup 2005, Málaga in Spain and 2nd prize Extracts, Highlife Cup 2013, Amsterdam.