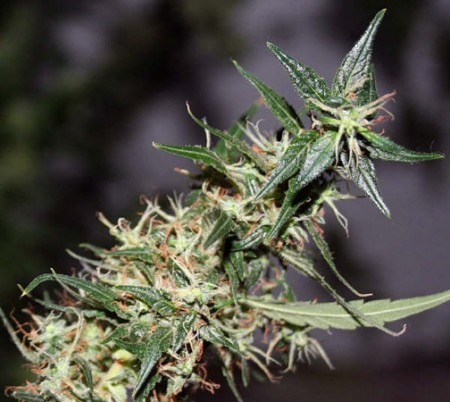 This strain is a parallel line to the Super Silver Haze, i.e. it has the same Haze father and the mother is a sister of the SSH. Accordingly, the genetic makeup of this strain is 25% NL5, 25% Skunk and 50% Haze. The expected flowering times depend very much on the selection of the mother but in general will vary from 8 to 11 weeks, so it is a practical 50% sativa for indoor growing. It is suggested that if the room does not have much height, go directly into 12/12 with a rooted clone or seed. This will still give a 1-1.5 meter plant. Yields of this strain are expected to produce between 450-550 grams per square meter (based on using minimum of 600 watts lamps). Lower branches may be pruned during the grow or pre flower phase, so the Mango strain puts its energy into the cola flower clusters. This is a good way to manage this plant if growing more plants per square meter than normal is preferred. The resistance to moulds is a positive feature of this plant, both for indoor and outdoor growers. Mango is a very special plant if one is impressed by resin production, and the aroma is of fully ripe mangos. It is special plant affecting people's cerebral areas. The plant's ancestors were HTCC winners of numerous awards, so its pedigree is outstanding. It has been in the making for some years now, but we at MNS feel it is as ready as it ever will be. If only the serpent in the Garden of Eden had tempted Eve with a Mango Haze instead of a mere apple, the whole world would have understood so much more.