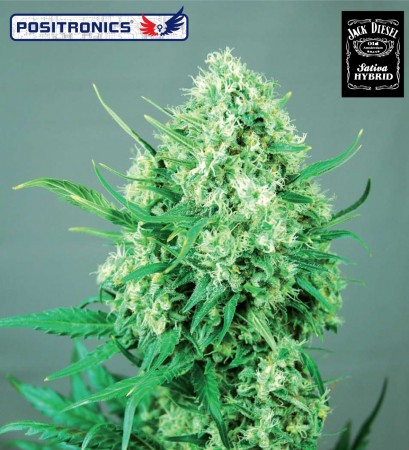 Two pillars of the Cannabis world that crossed togheter has produced a variety that reaches and exceeds the origins. The strength of one of the most popular hybrid in the world, Jack Herer, added to the power of the legendary NY City Diesel. A strong and vigorous plant, with a growing pattern typically Indica that becomes Sativa at the time of flowering, when enlarges its lateral branches, and filled them with a large number of little but strong satellite buds resin coated around the magnificent central cola. Aroma with complex tones of noble wood, with hints of flowers and fruit.

It generates a powerful high strongly psychoactive, those much sought after by lovers of the Sativa. At the beginning it seems relaxing, but quickly becomes exciting.

The plant needs a large tank for the developed root system. Very important to control the pH of water daily irrigation.