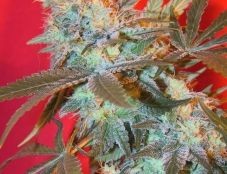 Iced Widow from the seed bank Female Seeds is a new hybrid strain of marijuana of high-quality, crossing of two cannabis plants with great international recognition such as the legendary White Widow and Ice.

After the crossing vigorous cannabis plants are obtained, branched with thick and sturdy stems as a fir tree. Its leaves are large and broad, of dark green color, which will acquire blue hues, as long as the temperatures at the end of flowering are relatively low, genetic memory of Ice.

During its flowering period of 8-9 weeks it will provide us compact and bulky buds fulled of large trichomes of resin which bathe all its flowers. Its organoleptic qualities stand out by containing fruity nuances contributed by ice along with an incensed aftertaste denoting its genes from the White family.